The following bit of writing appeared on page 75 of my Grade 10 English class personal journal. It was handwritten in a large cursive script in black pen. A lot of ink was wasted in this adolescent journal pining and being petty and insecure about things that time has, thankfully, largely erased from my memory, but I'm glad I dedicated at least a couple of pages to recording some positive moments from that awkward and uncharitable period of my life. Being a teenager is mostly the goddamn worst, but it can also be, even if only for the briefest of moments, the best. (If you were stumbling along with me in 1988, thank you. It's cool to see how far we've come. And thank fuck we don't have to do it again.)

As an aside, my fifteen-year-old self had already discovered what was to become my governing life philosophy by ending a fair number of entries with the phrase "C'est la vie!", the slightly more exotic version of the title of this blog. A lot of observations in this journal made me cringe, but that recognition made me smile. 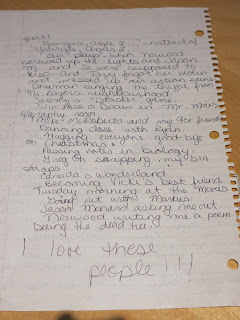 This is my last gifted year. I’m really sad about it. We had such good times together. I can’t think of very many bad times. Here’s a trip down memory lane...

My fainting in English/History class in grade 9, 60th anniversary. God, remember that? My dress and the 50’s room which was the cool hangout. Cheap pop, too!

And our walk through the streets on Friday evening. Holding Jason and Markus’s hands. And Jason lent me his sweater because I was cold.

Math class with Mrs. Fowler. She’s a great teacher, if a little strict.

Grade 10, my birthday present. An overhead which I still have, and a truffle shaped in an Egyptian’s head. The truffle was in about a hundred boxes. It was so sweet. Ryan gave it to me.

Ryan’s “babysitting.” God was I upset!

The trip to the zoo when Ryan gave me my monkey that he so sweetly stole for me.

Going to ROM. God was that ever great!

Our plays. When Norwood screwed up the lights and Jason M. and I were supposed to kiss. And Tazy forgot her violin and messed up our action scene.

Mike McRoberts and my 9-er friends.

Hugging everyone good-bye on Christmas.

Tuesday morning at the Movies.

Going out with Markus.

Jason Menard asking me out.

Norwood writing me a poem.