On It (with a spoiler about Cujo, so consider yourself warned)

From Holly's Bookshelf: It, by Stephen King 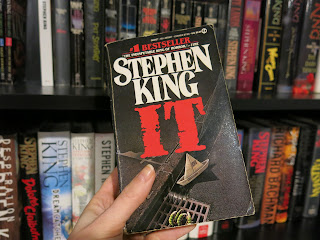 This fact may come as a surprise to you, but I was an avid reader as a child. I read everywhere, all the time: in the car, at school when I was done my work (I was precocious and always done early), walking to and from school, in my closet when I wanted to hide, and in bed under the covers with a flashlight when I should have been asleep (which I blame for my myopia). We were poor, so libraries were my holy place, but there were always books in the house.

My dad read new age books about past lives and astrology and other non-fiction that was of no interest to my fiction-hungry heart, but my mom (thank you forever, Ma) read trash, thick paperbacks by Sidney Sheldon and John Saul and Danielle Steel and Dean Koontz. I wasn't supposed to read these, of course, but I did, sneaking chapters a few at a time when she was busy, flipping through and rereading the good parts (sex scenes, natch) whenever I got the chance.

My mom was also a big Stephen King fan. 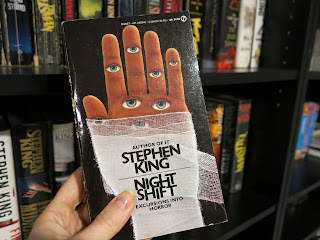 (The amount of terror this rather quaint cover caused me as a child is laughable today. Also, you couldn't get away from it. Those goddamn hand-eyes are also on the spine.)

The first Stephen King book I read was It, and It scared the hell out of me. I was 13, and all the things I was already afraid of made appearances, and even things I didn't know I was afraid of, like blood burbling out of the bathroom sink when I was in there alone. (I never peed so fast as in the months after reading that book, a horror which revisits me even now on occasion if I am in the house by myself.) The monster's final form was something I should have predicted but didn't, and if you haven't read the book I won't spoil it for you, but suffice it to say that I have not, and never will, grow out of this particular phobia.

It was about a gang of loser kids, which I could identify with, but it was also about the adults those kids turned into, which was cool, given my budding adolescence. It had everything an imaginative girl with a decided fondness for the macabre could ask for: terror and violence, sex and romance, swear words and sacrifice. I read It, and then I read every other Stephen King book that was published. (His short stories are some of my favourites. If you haven't read The Long Walk, you should probably get on that.) 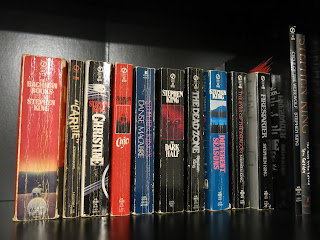 King is a prolific writer, and he would release a new book almost every autumn, just in time for my birthday. I read them and I loved them all, although I was fondest of the ones without happy endings. (Nothing upset me more than watching the movie version of Cujo, where the kid fucking lives. I was furious.) 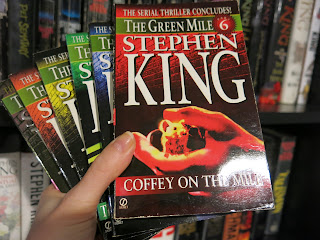 (I own The Green Mile in serial form. I can remember waiting for the next one to come out, which is almost impossible to imagine doing in the gimme-now society of today.)


After King's near-death accident, I noticed a definite trend toward happy endings, and I eventually moved on to rather more sophisticated fare, so I stopped reading his books somewhere along the line, but there will always be a terrified place in my heart for his particular way of digging right into our collective unconscious to root out our greatest fears, his brilliant use of dialogue and italics, and the way he identified me personally, with affection, as Constant Reader. Nobody spins a yarn quite like the King. 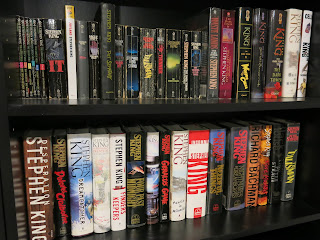